The State of the Mobile Game:

1. Nintendo Has Entered the Room

No, Super Smash Bros. hasn’t come to mobile…yet. In the meantime, characters like Mario, Kirby and Donkey Kong will have to do. Nintendo has partnered up with mobile game publisher DeNA to bring Nintendo characters to mobile devices. While these games will be “free-to-start,” though, they won’t be free to play. Nintendo’s first release should come out by the end of this year. It’s time to look at the future with interest—especially considering that Nintendo’s franchises may be worth more than $2 billion in the mobile games market.

Warner Bros. Interactive Entertainment recently announced that Game of Thrones, along with Lego Batman and Mortal Combat X, is coming to mobile. These are among five new mobile games to be released in 2015 by Warner Bros., with mobile becoming “a key priority for the company.” Through these ambitious new releases, Warner Bros. seems to be pushing for a bigger slice of the approx. $30 billion mobile gaming market.

Supercell tripled its revenue in 2014, raking in $1.7 billion from hit titles “Clash of Clans,” “Hay Day,” and “Boom Beach.” Popular and well-liked gameplay aside, top developers like Supercell have another major advantage in the mobile games market: the ability to outspend all smaller competitors. It takes money to make money, as shown last year by Supercell’s $440 million marketing budget.

4. Google Play Steps Up Its Game

Google Play is rolling out a new age-based rating system for mobile games and apps. From May onward, developers will need to fill out a questionnaire on their new game or update before going live. What’s more, to “better protect the community and improve the app catalog,” new apps on Google Play now must be approved before showing up on the Play Store. The new review process will be short—a matter of hours, according to Google Play product manager Eunice Kim.

5. And So Does Apple

With better hardware comes better gaming. That said, the horsepower of the iPhone 6’s A8 processor and GPU (Graphics Processing Unit) has high-end game developers from EA to Ubisoft lining up for a piece of the action. Apple promises to “raise the game” and deliver quality graphics with the A8’s GPU (which is 50% faster than the A7’s GPU) along with its Metal technology, which is said to put the A8 ahead of the pack in terms of both power and power efficiency. That’s more gaming for less battery.

With half a million mobile games to choose from, it’s only natural to start out your search by checking out the “Top 50” on a platform like the App Store. How else to find the best games on the market? After all, the higher the number of downloads, the better the game.

Maybe. But maybe not.

When it comes to mobile app downloads, it’s no secret that quantity often stems from massive marketing budgets.

This is because the mobile app market is beyond saturated. As the total number of mobile games grows, so do marketing budgets. And as a result, games with the budget to get onto the Top 50 list tend to stay on the Top 50 list.

So what does all this mean? It means that there are thousands of great games you’ll never find on a “Top __” list. It means that you probably wouldn’t get the chance to play those games by flipping through download popularity charts. And it means that if you’re looking for a way to find those games, we have something for you.

Do you want to:

If your answer to either of those questions was “yes,” then this is for you: 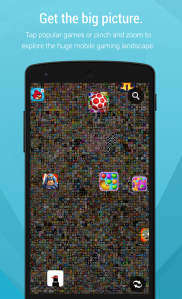 Chances are, you’ve heard of Bejewelled, Angry Birds, and Temple Run. So have all your friends. (And so has most of the world.)

Beyond these famous names, though, what else is there? You have a feeling that a whole hidden trove of games waiting to be discovered. But how would you find them? They’re not on the iTunes Top 10, or on the Google Play store.

You could furtively, hopefully, try typing specific things into the search bar: ‘racing’, ‘car’, but when you’re being shown a drop-down list of 10 out of a myriad of search results, it feels hopelessly tedious.

(And why, when you ask Google Play to show you other games you might like after a particularly satisfying game of Angry Birds, does it offer you Brothers in Arms?)

The world of mobile games deserves to be discovered in a way that does fuller justice to the amount of diversity, possibility, and fun out there. Current platforms don’t seem to cut it, so we created our own.

We’re the team behind Yttro: Game App Discovery, a mobile platform that helps you intuitively explore and discover game apps by upgrading your online browsing into a lavish, exploratory, and yet relevant mobile expedition.

What that means for users: is no-holds-barred access to a much fuller buffet of mobile game options, which unlocks much greater possibility for quality game app discovery than ever before.

What that means for developers: is a more levelled playing field that disrupts the hold of the app store top charts, providing unprecedented app exposure without the drawbacks of orthodox advertising.

We like it. We hope you do too! Be the first in on the action at yttromobile.com.

Recently on the Blog